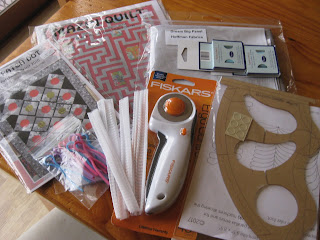 Thursday saw me at the quilt show.... did I look at the quilts? No. Did I spend too much money? Yes. Here are my purchases. Needles ( could have bought cheaper at the LQS) Bobbin keepers ( could have bought cheaper at LQS)new rotary cutter , bit kinder to the hands, two patterns that I didn't need but hey , a quilting template ( already used) some spool nets ( lost the packet I bought about a month ago) do you see a pattern, and a Dream Big Hoffman panel. The last was extravagant but they are so beautiful, Look them up and you will see what I mean. Ran into lots of people that I hadn't seen for ages as well which was a bonus.

The real reason I went was because in Oct last year I visited QLD and went to their show. At Patchworks Unlimited stall I saw a pattern that I had bought ages ago and lost. On telling the girls, they just gave me a replacement. I told them that if I found the original I would return it. Well......... two weeks ago I found the original and so I returned the unused replacement one to Patchworks Unlimited. Lovely that they did what they did but I'm glad to have returned the other. Also found out on Sunday that there is to be another grandniece or nephew so as this pattern was for a baby quilt it's been found just in time. 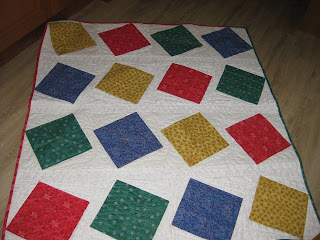 I took this quilt to retreat in May to get the top ready, only to discover that I had cut the triangles around the squares incorrectly. If I'd used them the way they were... 15 of the coloured squares would have gone one way and one the other. This has been made using scraps so the triangles were cut from the backing of my candlewicked quilt, which is a tone on tone. I knew I had used every last bit so no more could be cut. The only solution was to flip them so the back became the front and vice versa. I'm an idiot but it's not that noticeable. This is the quilt used in Angela Walter's free motion quilt challenge so I dutifully quilted each block as she showed on the you tube videos. 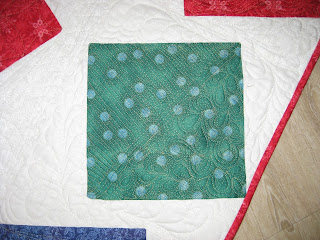 This square is my favourite.... paisley meanders in half and straight(cough) in the other half. I also did feathers around these blocks.., so two rows with feathers and two with again straight(cough) lines or dot to dot. 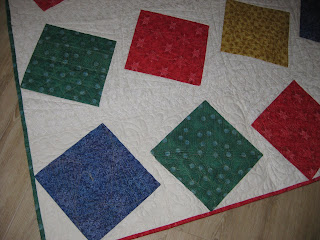 Another close up of some of the blocks. Overall I am pretty chuffed with myself and the quilting, feel much more confident to tackle FMQ now. The recipient of this doesn't quilt and hopefully will love it. Now to tackle the next butterfly quilt and the list goes on.

I have been sewing just not blogging! 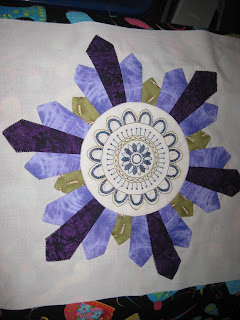 So Razz a dazzle for I think May. 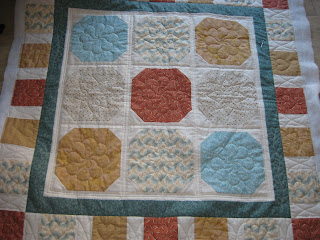 Playing with the Westerlee rulers. One Christmas gift done and dusted. 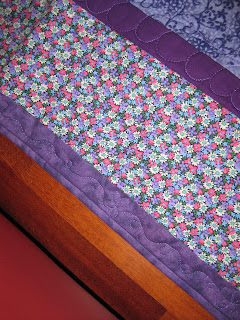 Border of a quilt that I want to leave in suspense. This is the border, FMQ by me, as well as the rulers in the flowers ( hard to see I know). The border next to that has a feather. 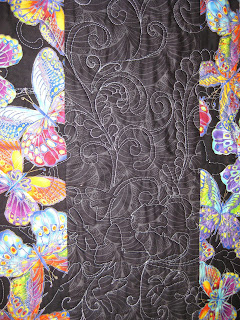 The back and I have been following a FMQ challenge of Angela Walters for feathers. This is my attempt on the above quilt and I am really happy.I did do some on the bigger borders as well and they are ok. They did improve when I realised that the globe connection on my machine was dodgy.. no wonder I couldn't see! Twiddle with a screwdriver to open the casing and WOW my light was back!
When this has been given away I will reveal the full quilt.